Taking a break after an abusive relationship 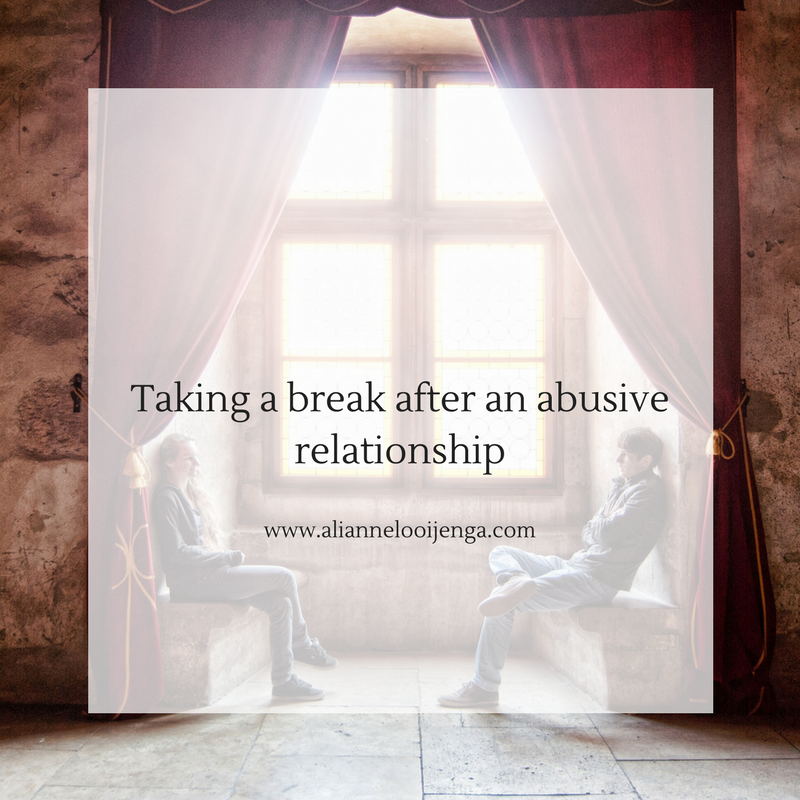 The text: “This time I have TRULY found the ONE!” is often accompanied by many exclamation marks and capital letters. Okay, I overreacted but you get the point.

In 2009 I was one of those women, when barely 3 months after I fled the home of my ex-partner, I got to know a much older man via Internet and committed myself fully to that relationship. Because I had no strong sense of ‘self’ and did not take the time to work on myself, the opinions of my second ex became my opinions. And I stood behind his opinions 100%.

You might still get to deal with your ex-partner who is looking for ways to keep in touch with you, be it by threats, or ‘courting.’

For example, my ex-partner did both. He appeared suddenly in my home and told me that he had met another woman. He showed me a ring and said that I could either accept it now, or else he would move on with that other woman.

I wished him sincerely the best of luck in that other relationship.

Little did he know that I already started a relationship with another man, a few months after we fled our previous home. Without having thought about or knowing who I was, what my needs were, what I wanted to achieve in life, the vulnerable ‘me’ entered the next relationship to look for some kind of security and acknowledgement. And looking for a relationship from a feeling of insecurity is never ever going to work.

Had I taken more time to figure out who I was, what my values were and what I wanted to achieve in this life, and had I invested more in my self-confidence and self-love, then I would not have had to look for this strength in someone else.

I would have known that I had this strength all the time and that everything I sought in him, I could have given to myself.

When this relationship ended and I lay in my bed at night crying, I realized that I did not cry because the relationship was over. I realized that I was scared. Afraid to be ‘alone,’ afraid that my first ex could do (yet again) something to my children or me, afraid that his threats would become true, and so forth. I placed the focus and the power with my ex-partner. I overlooked totally my own possibilities and strength.

The last thing you want (I hope) is to repeat your past. Because you, just like everyone else, have right to an equal, healthy relationship with yourself and with someone who loves you.

The end of a relationship, and certainly the one with an abusive partner, hurts a lot.

It is the blinder which is torn away from your eyes; it is letting go of a vision for the future which will never materialize with that person and which probably has never existed and the awareness and recognition of everything that has taken place.

That hurts and is not easy. But only if you acknowledge the darkest places within yourself, you can find your own strength. You must find the power within yourself and need to build a healthy foundation before you can start an equal and balanced relationship.

Heal yourself first. Make yourself strong, become aware, become the leader of your thoughts and of the direction in which your life is going.

Before you enter a new relationship:

In a relationship two imperfect people come together, each with an own set of experiences and life wisdom. Have a good look first if the package which your partner brings is the one that fits at this moment of your life and with your future vision.

Does it contain a lot of drama? Does it contain the drama that is not healthy for you? It is always okay to say no or to simply look at it twice. That person could be possibly not the right one for you right now. He is not the only person on this planet with whom you can connect.

Is he not yet single? Let him solve this on his own and live your own life. He has his own piece to deal with, and must choose his own path before he can build a new foundation. Only after that can a relationship be built. For that, you do not need to pause your life.

Be careful that you do not become a sort of dramaholic; someone who gets from one dramatic relationship into another. That is not a way to be happy, or to keep two people together and it is also not a basis for a solid foundation [of a relationship].

Do you seek warmth in another? Attention? Security? A sense of safety? Someone who takes away the loneliness? Give whatever you need to yourself first.

The period after a relationship with an abusive partner can be one of extreme growth. In the past 7 years I was surprised regularly by how many times I have completely transformed.

From someone who was uncertain, with no direction in life or even an own opinion to the woman I am today. If a man fell in love with a person I used to be then, he would not have been able to appreciate the strength I have in me now. Perhaps then my growth could not have been as explosive as it was. Since I have discovered myself, I have chosen to start a balanced relationship with someone who is my friend, who is strong enough and who largely shares my norms and values. And I believe that I will be a better partner by being who I am today.

That period of relative rest (how much rest can you have with growing up twins, court cases, complaints, studies, courses and blogs? ) is a period I treasured.

Previous Story
Family by blood vs family by heart
Next Story
Trauma: 4 ways to deal with it