When others talk badly behind your back 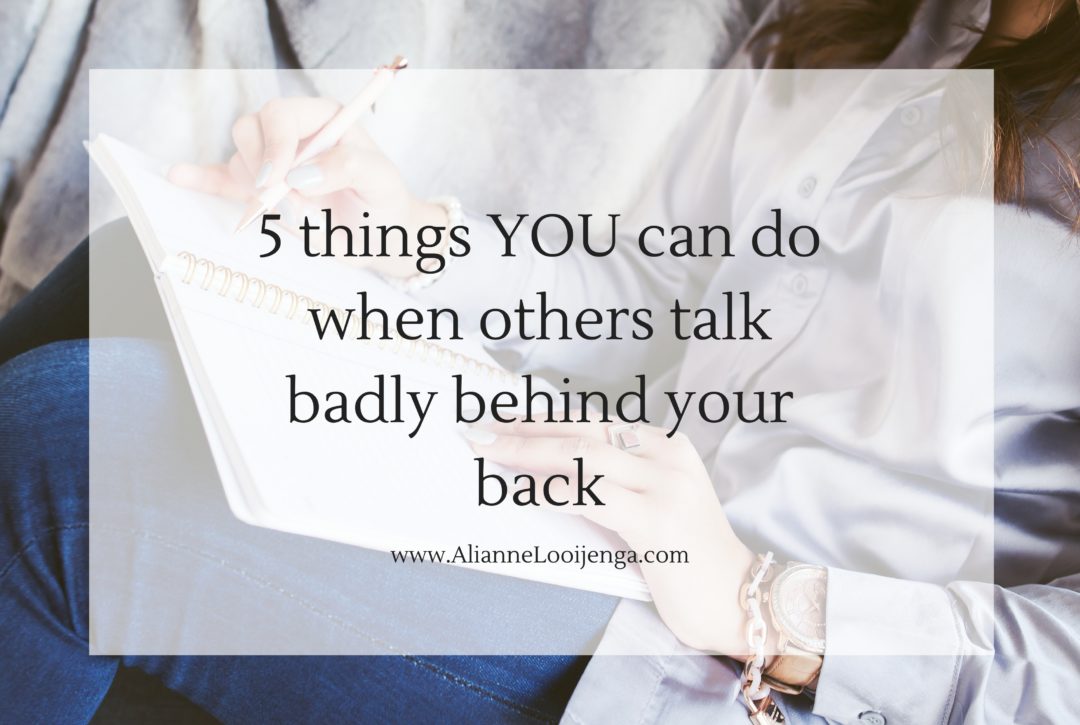 When someone talks badly behind your back it can feel pretty awful. It doesn’t matter if that person is someone close to you or someone you barely know.. Knowing that someone is deliberatly degrading you in public, trying to hurt you or even trying to persuade others to think negatively about you, is enough to feel hurt for several days.

Gossiping is often not about you

Most of the time when people talk badly behind your back it has nothing to do with you. It has everything to do with them. They probably have an issue with themselves and they blame it on you so they don’t have to sort things out with their own personality. That they are talking behind your back instead of facing you and talk open and honestly in your face is a sign of immaturity and a reflection of them, not you.
There are many reasons why someone might talk badly behind your back. It is likely that person may suffer from poor self- esteem, anxiety or jealousy. That person may even have some trouble with control issues. They feel the need to degrade you behind your back so they can either feel good about themselves or can shift the blame of something they know (deep, deep) deep down is their own issue.
If you make your issues the problem of someone else you don’t have to work on yourself, right? For the bad-talker to realise that they are the one that has some work to do is scary so it is easier to make it your issue. This is especially the case for someone with anxiety or poor self-esteem.
Sadly, as I have said in previous blogs: you can’t choose what others say about you. But you can take the power back and choose your response. You can engage in their little games and let them dictate how you feel and how you behave but you can also raise your own standards by realising that their need to degrade you has everything to do with their issues and insecurities and NOTHING to do with you personally.

Once you know that, you can decide how you want to respond and thus take your power back. Do you think the gossip was an one-time event and you just want to ignore it? Do you want to confront the other? Or do you want to kill them with kindness? You can choose a method that best serves your standards.
Kill them with kindness.
This is one of my favorite methods and it has nothing to do with faking kindness. In many cases I try to feel compassion for the gossiper. Try to see their insecurities, anxiety etc. That does not mean that I want to justify their behaviour, it just helps me to understand the motives of the other person, forgive them, hold my power together and maintain the standards I have set for myself for how I want to treat others.
Limits
It does not mean, however, that you have to spend a lot of time with people who literally keep you down. I suggest that you keep them at arm’s length. Stay true to yourself, uphold your standards, refuse that the behavior of others dictate how you should respond.  Just don’t be too personal. They have shown that they are not trustworthy in that way. Pouring your heart out could be ammo for even more gossip.
Choose people who support you
They say that you are the average of the people you spend most of your time with. So you best spend it with people who love you, support you, are honest, mature in a way that they dare to talk openly and honestly. Surround yourself with people who makes you feel energized and who are not degrading your self-confidence.
Confront them
Another favorite of mine: tell them that you’ve heard that they have an issue with you and that you would like to talk about it. This shows your goodwill, your level of maturity, your courage, your ability to set your ego aside and that you are willing to take the first step eventhough that other person has hurt you.
Don’t take it personally. Above all: refuse to be a victim. Remember that it is their issue. It has nothing to do with you. And while you can’t choose what other say or think about you, you are always in control in the way you choose to respond.
Love,
Alianne
Leave a Comment
Mindset
Share:

Most asked question from survivors: “Why did he abuse me?”

Recently I asked an survivor whether she had questions for my blog that would let me help you. The questions she asked were namely “Why” questions about the abuser:

An abuser makes himself a victim because from this position:

1.) he does not need to take responsibility for his actions,

3.) and because from the position of a victim he does not have to think about his actions (because it is your fault) and also, this way he can easily push away potential feelings of shame and does not need to seek help for his behavior.

4.) In addition, from this position he receives empathy and validation mostly from other women (“oh what a nasty ex you have”) and sometimes even female professionals, whereby of course often some of the facts are omitted from the story, or respectively added to it.

Why an abuser behaves the way he does, is difficult for me to indicate from sitting behind my desk. Of course there is a lot to say about it from the psychological point of view, but the possible answers are very diverse and as a matter of fact, the most of us will not be able to find out precisely why. It could be due to a personality disorder, but sometimes an alcohol addiction plays a role. An abuser who mistreats due to a borderline personality disorder does it because of different impulses/motives than someone with an alcohol problem.

What can help for example is to find out what kind of an abuser he is. For that, I use Dutton’s distinction, you can read more about it on the following website: http://www.ncbi.nlm.nih.gov/books/NBK64431/

In conversations with clients, I am not that much interested in their abusive partners though. I am more interested in the “why” of the victim. ‘The fear is beaten into you with the first hit” says a friend of mine, but another question is; what did you tell yourself that made you want to continue that relationship? When did you have enough?

In many relationships where emotional or physical abuse plays a role you see a cyclical pattern;

In the first phase there is tension building; the abuser is moody, attacks verbally about little things, belittles the victim, shouts and criticizes.

The victim responds by trying to calm the offender down, being quiet or on the contrary talking a lot, ensuring that no one irritates the abuser. That is why, for example, she will ensure that the children stay quiet. She is passive, withdraws and walks on eggshells.

In the second phase the physical abuse starts. The victim is kicked, beaten, pinched etc. The victims respond to this by protecting themselves, for example, by going away or calming the partner down. At this stage some children or neighbors call the police.

Thereafter the third phase follows, in which the abuser apologizes or asks for forgiveness. He declares his love and says he will never do it again. Cries. Says that he/she cannot live without the victim. Gives her an important feeling and position. Threatens with suicide if the victim leaves, appeals to her tendency to care for him. This behavior of the abuser keeps many women in the relationship and causes mutual dependence. The reaction of the victim is that she agrees to stay, tries to stop legal proceedings and becomes hopeful for their relationship in the future. Another group of abusers threatens during this period with a lot of conviction to kill the wife and/or the children, or to take the children away. In this case there is no period of remorse and empty promises, but the abuser will simply ignore what he has done to the victim. The woman knows these are no empty threats and remains to stay alive or to protect her children. After that, the first phase starts again.

The point is that many women become ‘addicted’ to their feeling of wanting to save him. Both the abuser and the victim convince themselves and each other that together they can conquer the world. The victim has the feeling that she has to keep standing behind her husband.

A process called “traumatic bonding” is activated. Traumatic bonding is the result of continuous cycles of abuse characterized by an interrupted alternation between a punishment (abuse) from the abuser towards the victim and bigger rewards (to keep you in the relationship). Powerful emotional bonds are created here. Negative emotions are pushed away while the positive ones remain. These bonds discolor both the past experiences as well as the hoop for a better future.

The difference between the man who commits abuse and the man in the third phase is so great that women want the most to forget that in reality this man has just one body, and want to ignore the science. Moreover, many abusers say that ‘it wasn’t at all that bad’ and that ‘she should not make such a fuss out of it.’ The victim adopts these sentences like a mantra.

The question, therefore, is not that much why he did what he has done, because the chances are very high that you will never get the answer.

Even more, the why-question about the abusive partner diverts from what it really should be about; how is it possible that a woman as wonderful as you has entered such a relationship and  remained in it after he started treating you wrongly. What did you tell yourself about yourself, the other person and the relationship? Why have you stayed? Was it out of fear or were there other processes at hand? Why did you feel attracted to him?

You cannot change someone else, but a better life for you does start with you understanding of yourself. Do ask yourself, above all, about what you need to make yourself mentally and physically resilient and to live your life up to your wishes. Stop focusing on what you can’t change, it’s a waist of time.

Do you want to learn how to no longer let fear govern your life, how to make healthier choices or do you want to become more self-confident? Or do you simply want to move on with your life in the new direction?

If you want to look from a scientific perspective towards partner abusers, I can wholeheartedly recommend the books of Donald Dutton. The abusive personality is one of my favorite books EVER but is not meant for people who don’t read on a regular basis or dislike reading about in-depth psychology.

P.S. 2 I think this short video of Matthew Hussey can help you out. It’s not as much about partner abusers but it is about toxic relationships. https://www.youtube.com/watch?v=d9JjyvHv9A4